The Uganda anarchists have decided to field a Frog as a Presidential candidate for the Uganda 2016 presidential elections. Hopefully many anarchists will come-up with very many ingenious ways to pull this off. 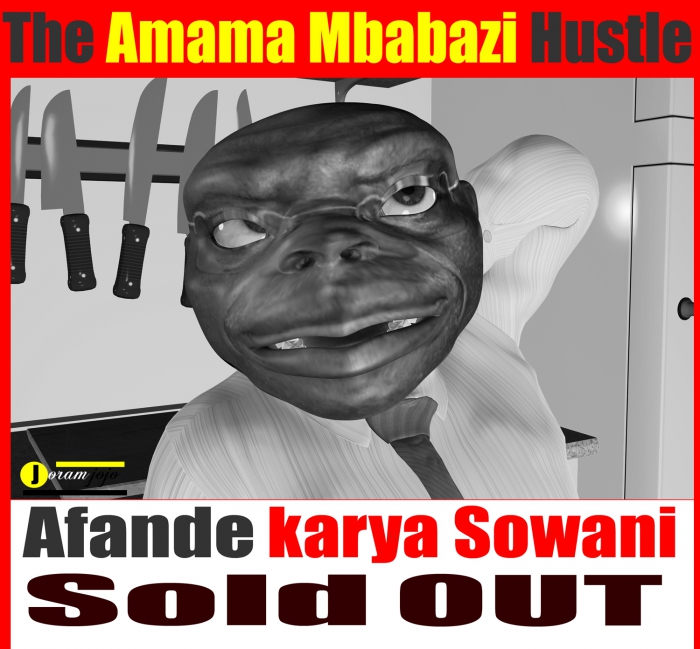 The main weakness in Uganda political landscape is with the opposition-the opposition in Uganda is mainly made of thieves and criminals.Their actions of opportunism and manipulation is not accidental, but deeply ingrained in their DNA as they mostly built their careers serving the Criminal dictatorship of Yoweri Museveni. 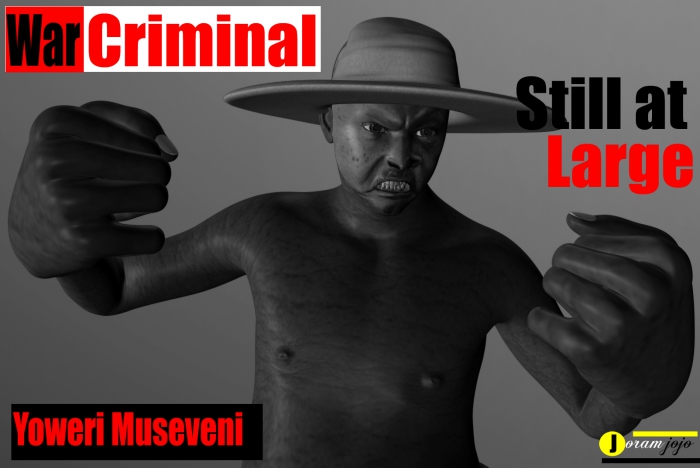 But when they fell-out of favor with their boss, they then hijacked the traditional opposition politics, while still maintaining strong links with notorious killers of the regime. This has not been helpful at all to the politics of Uganda,but created very many little fucks in the opposition, claiming to represent the people. 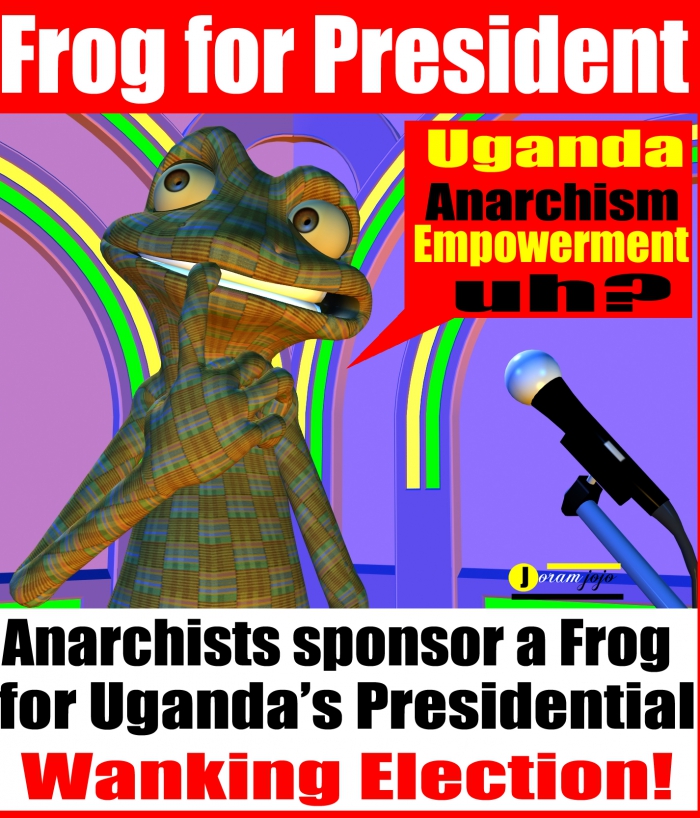 For sometime we did give a chance to the political class in the opposition-anarchists thought it was better to let them wake up from their cozy cesspool naturally, but its now been three electro processes taking place, and the bad stench is still around and has even got worse. We see the same frogs taking our people for fools on a fourth process. This has got out of hand .... two nasty frogs are now indirectly being empowered by the regime and imperialism fitting the bill. 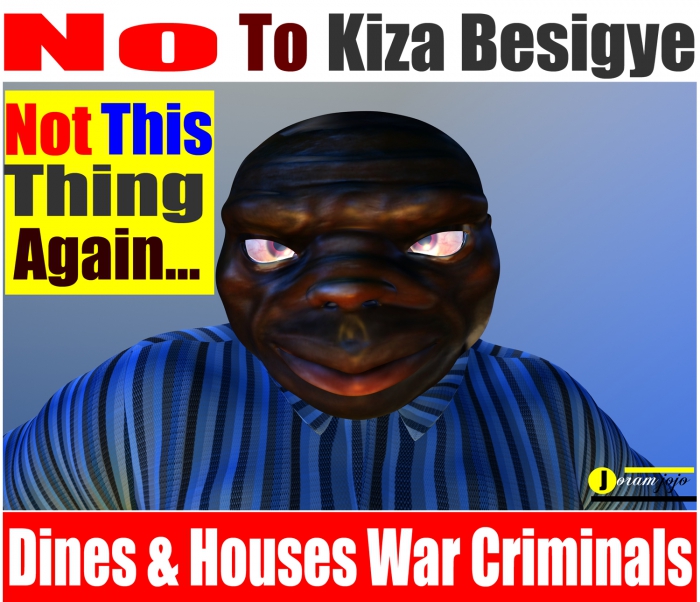 The political situation in Uganda has always been crap and pathetic, as its always the same class of parasites, always manipulating and taking the populace hostage. I've followed and tried to work-out the political system in Uganda since my childhood, but it gets worse everyday. We still have ministers that served under Idi Amin's regime, still holding powerful ministerial portfolios and directing security services.

What is the use to even bother voting for the same..same murderous, corrupt, backward thieving parasites. Uh? The entire political system needs dismantling by any-means necessary- as voting is a waste of resources and time, because the same parasites will always find their way through. Its like a broken sewer pipe, every-time someone flushes down their shit, it splashes everywhere into the neighborhood. 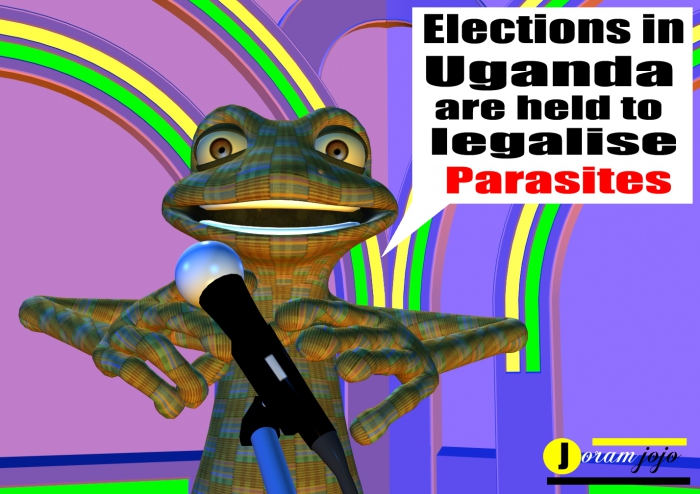 The political class in Uganda is the only one in the World that lacks a developmental project for the people. However, this's  understandable as Uganda is a great shag for imperialistic forces that  have no bother for a developed African nation. Because 75% of the Uganda society is illiterate and poor, building democracy through mutual consensus is very problematic. That's why we've decided to come up with our own format of political frogging...this came up after realising that the fake Uganda Opposition contestants, have a facial similarity with the old frog. If those frogs can take our people for a ride, then a better frog is waiting to ambush them 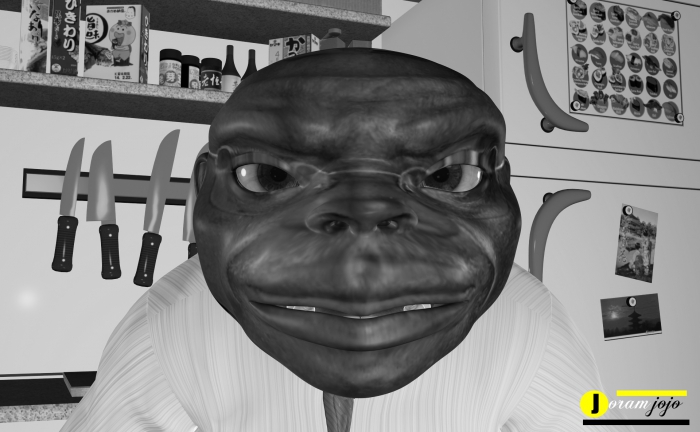 Today, access to media(opensource) is in the hands of a few vocal individuals that happen to belong to the parasitic class as you'll see below

WATCH THIS SPACE NEXT WEEK-Meanwhile enjoy this good read:

“STATUS REPORT
TO: The Head Special Duties State House, The Republic of Uganda
FROM: JOEL ISABIRYE AND MPIIRWE NICHOLAS (MESSE)
DATE: 30th JUNE 2015
RE: MOBILIZATION THROUGH MEDIA
Since we started work on the mobilization project, we have progressed a bit but need to do much more in the month of July 2015. After our various meetings beginning with the first one on the 17th of March 2015 at State House, we started promoting candidate Museveni for 2016.
The Current Issues
The first issue is aspiring candidate Amama Mbabazi.At 4am on Monday 15th of June 2015, Mbabazi announced that he was going to stand. His announcement was made via YouTube a social networking site for videos. His presentation was lacking energy and he seemed very timid. Nevertheless the excited groups on social media went in overdrive to celebrate his announcement.
Besides other mobilization efforts we are undertaking, that evening at 9pm, we met and made a strategy. The first was to undermine Mbabazi’s candidature online.
On Facebook, Joel Isabirye has been a commentator on social, economic and political events in the East African region. In the 2013 elections in Kenya, he made commentaries that both Kenyan and Ugandan Journalists would follow. See for example a statement by Geoffrey Kulubya Editor of Bukedde Newspaper in a conversation that I had with him:
“”
So when Mbabazi announced I went online and demonstrated how Mbabazi would fair. It was a fairly balanced comment but clearly showed that Museveni would carry the day in 2015. As such many believed that it was a well reasoned view and they saw that while Mbabazi appears to be vibrant on social media, on the ground he is not present.
“

Joel Isabirye
June 26 at 1:03pm · Edited ·
could amama mbabazi (as is being alleged) have paid the c.e.o. magazine to cook and release results of an online survey that shows he was the favorite candidate to win the 2016 presidential elections in uganda?i don’t think so.he is not the type.i also do not think the c.e.o. magazine would make such a deal.i actually believed the outcomes of that survey because mbabazi is exceptional strong on social media.however there are as i always say 5.4 million ugandans on facebook-and a slightly higher number with online access (that is those in uganda and outside uganda).statistically that is kampala x2.on the ground (across the country) candidate museveni registers more appeal.indicators show that museveni will win 2016 by 85%.it could turn out less or more because many intervening variables could occur between now and march 2016.but mbabazi will change how politics (especially those who oppose) should be organized and performed.it will be with more decency, more systematic and laden with legal overtones.three of the driving factors for voter behavior in elections in Uganda are: 1.how often the voter sees (not hears) the candidate throughout the five interceding years between elections (at burials, at funerals, launching projects, at weddings and introduction ceremonies ,at churches etc).elections are rarely won in the campaign period.that is why new politicians (from lc1 to others) are advised to contest in one election as an introduction and then begin the process of the five years to the next elections 2.the groceries brought around by the candidate at the moments at which they are seen in the interceding years and during the election period.3.service delivery issues (a distant consideration).mbabazi’s main barrier is time more than anything else.there are 112 districts in uganda.each has at least 5 major trading centers and 1 town.to traverse each one daily (without including the 300 villages minimum in each district) to strongly sell yourself, you need 622 days.that is close to two years.if his sacking had been delayed, he would have been lucky to use his position as prime minister to criss cross the country.and due to minimal internet access, social media is largely ‘unpresent’ in the vast countryside.one option he has is to book advertising on the 227 radio stations nationwide declaring himself as an aspirant.he needs at least 12 billion to do that over the next four months before nomination.that he can afford if all the stations accept to run his advertisements viz a viz the electoral laws.in these circumstances,his adverts would have to be as aspirant.he would have to do several feedback type advertisements (with ivr and sms response platforms) telling people he is planning to stand and seeking their opinion and what they would want him to address if he stood as opposed to promoting a manifesto and agenda.back to the polls.one appeal i have had for ugandan opinion pollsters is to include a classification question of: are you a registered voter? that question would filter voters from non-voters in the process giving more accurate indications of the vote preference within registered voters and non-registered voters.as of now generalized polls are highly speculative.but museveni will win 2016.the margins being contingent on the intervening variables between now and then
Current research in Kampala if elections were held today

We are ready to conduct this workshop and use it as a mobilization tool to promote Mzee.
3.Church Choir Recording Programme
10 Choirs per region x 3,000,000 = 120,000,000
OUR WORK ON EBBALUWA AND MONDAY TIMES
We started intensive work in the two online media channels that we run. These are Ebbaluwa newspaper (a Luganda newspaper located on www.ebbaluwa.co.ug
) and Monday Times newspaper (an English newspaper located onwww.mondaytimes.co.ug
).
The mobilization on the two newspapers included writing positive articles about Mzee and driving readership to understand why Uganda desperately needs Mzee more than Mzee needs Uganda. Wherever we could find news that would promote the cause we could turn it to our advantage.
This can be exemplified by the following articles:
Ebbaluwa newspaper
1. Moses Ali agambye “temulonda Mbabazi”
http://ebbaluwa.co.ug/details.php…

8. Amama and Besigye fail to agree on candidate
http://www.mondaytimes.co.ug/details.php…