This General is responsible for thousands of deaths in Uganda,Rwanda,Congo,Sudan,Somalia,and Central Africa. At one time, he bragged to General Karekezi Kayihura, the Uganda para-military Police Supremo, that after beating a suspect for three days, the suspect could not die. But after having a drink of Uganda Nile Beer, "I went back and smashed the suspect with a metal bar on his head. Then the suspect whispered that really you have killed me, then the fool died!" 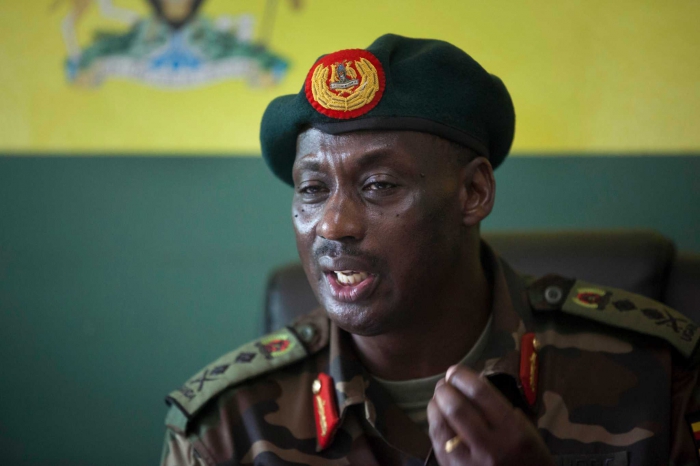 Salute Comrades,We would like to inform the people of the Great Lakes region of Africa, that the notorious murderer and tormentor of our people, General Aronda Nyakairima aka"Shitani", is no more to cause pain on our people.The criminal was taken-out by the ghosts of his victims that were murdered in cold blood by him while en-route to Uganda from South Korea to commit more murders.

The Free Uganda Political organization does not consider the death of a mass murderer of our people as sad news, but good news. We as an organization we shall never be saddened by the death of anyone involved in the killing of innocent people. The demise of a heavyweight Killer, such as Gen.Aronda Nyakairima, does not only expose the hypocrisy of those Ugandans pouring messages of condolences to the murderer's family, but also shows that they have no remorse for his crimes.

Though Murderer Aronda Nyakairima was one of the main military strategist of the most lethal dictatorships of our time, is no more, it does not mean that the dictatorship is short of murderers. However, the dictatorship has been punctured big time, and we expect more punctures to come very soon.

Fellow Comrades, Free Uganda will never give-in to emotional blackmailers especially when it involves human rights abusers. Our struggle is not to please families and friends of mass murderers, but total liberation from the murderous system that has left over 6 million innocent people dead in the Great Lakes region.
That's why the Great Lakes Victims Forum(GLVF) will be matching in the localities of: Goma(Congo DRC), Luanda(Angola),Ngara & Mtwara(Tanzania), and Kibitoke(Burundi). To celebrate the death of General Aronda Nyakairima.